The Tabula Hungariae, the first printed map of Hungary (1528, Ingolstadt), was placed on the Register in 2007.

The specialized organization of UN, the UNESCO started its Memory of the World Programme in 1992, with the goal of advertising written or audiovisual documents of universal value.

The Hungarian National Commission for UNESCO was founded on 15th January 2003, in order to choose and suggest documents to be placed on the Register.

Until 2013, six Hungarian related documents were placed on the Register. 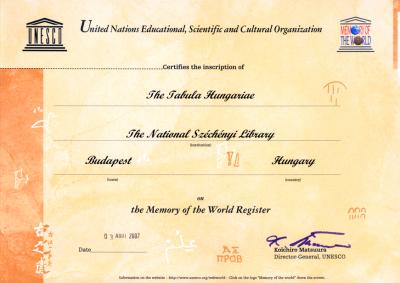 2013 – The first documentations of Ignác Semmelweis’ discoveries about childbed fever – Semmelweis Collection on the website of Semmelweis Museum, Library and Archives of the history of medicine